I’ve dreamed of sailing across the Atlantic Ocean (and/or circumnavigating) since reading the book Dove as a teenager. It’s about a 16 year old boy from California that circumnavigated the globe on a 20 something foot sail boat. It’s something I’ve talked about and prepared for ever since.

I’ve owned small to medium sized sailboats, read countless sailing books and magazines, sailed as much as possible, got my Captain’s License, crewed from New York to Florida and from Bermuda to Newport.

But I grew tired of talking about it (after 35 years). I read a compelling boat advertisement about 10 years ago that said that most people either don’t have the time, the money or the health to make an ocean voyage, so if you find yourself fortunate enough to have all three, you’ve got to go. The time was right for me to make it happen.

There are so many great “blue water” boats, but I decided that a performance (fast) catamaran was for me. I decided on an newly designed Outremer 45.  Outremer has a proven track of building Ocean worthy catamarans. Since she’s built in France,  I would have the opportunity to sail her home, across the Atlantic.

I signed the contract in January, 2014 and was euphoric until two days later when I was up all night trying to figure out how I was going to find the time to sail the boat from France to New York, provision the boat, find a Captain and crew, do adequate sea trials, with family and work responsibilities.

After interviewing a few Captains, I hired Captain Jan Cluistra. Jan has crossed the Atlantic 36 times on Catamarans and his references spoke to his terrific experience, skills and integrity. Catamaran manufacturers hire Jan to deliver their new boats to the United States from South Africa. I felt so lucky to have the opportunity to sail with probably the most accomplished ocean crossing sailor of catamarans on the planet.

Captain Jan and his fantastic crew (Claudia Dengler and Larry Roland) and I left the dock in La Grande Motte, France on November 5, 2014. After stops in Mallorca, Spain, Gibraltar, and Lanzarote, Spain (Canary Islands) we sailed the trade winds west to St. Marteen (Caribbean) and arrived December 10th. (17 days from Lanzarote).

There are so many reasons why the voyage was so wonderful. First the boat was fast and comfortable and seaworthy. Surfing the waves and running with the wind on a catamaran is a pleasure. Second, Jan, Claudia and Larry were so fun to sail with. Jan is a great sailor, a confidence inspiring leader, and a wonderful person for whom I have great respect. Everyone on Davali was passionate about sailing, woke up anytime of night with a “can-do” attitude and enthusiasm, and knew what they were doing…awesome!

We enjoyed the latest technology like Delorme two-satellite texting with maps which enabled family and friends to follow us on a map and communicate, satellite phone for calls and weather download, and other modern-day navigation electronics. 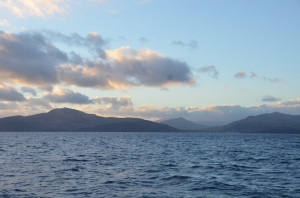 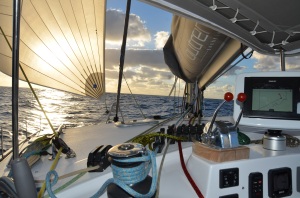 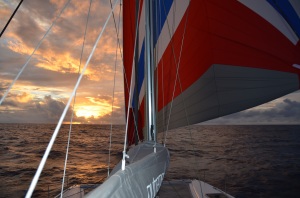 Larry Jan and me

Just before they swam under Davali

Hiking out on trapeze (Hobie style) 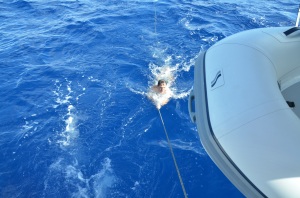 nearing the Caribbean, time for a dip 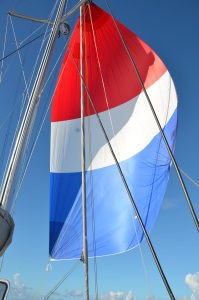 broke out the gennaker for some light wind 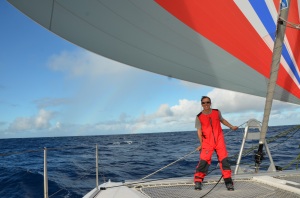 At dock in St. Marteen with Larry, Claudia and Jan

Thank you for a wonderful voyage!

“Let’s get cracking on the crossing”

After impatiently waiting for the Westerlies to turn North, we are ready to rip.

And check out Davali…a bucking bronco about to tear the cleats off the dock. 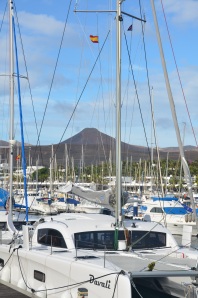 Davali is thrilled to get “cracking on the crossing”

So many exciting moments, not least of which was the arrival in 40 knots of apparent wind to Lanzarote (Canary Islands) and docking in 30 knots of wind. After deciding the strong winds were going to continue, we committed to docking, and turned into the harbor. There were about 10 people on the dock to help secure us. Our adrenaline was definitely flowing. Captain Jan docked like the pro he is.

While I haven’t climbed Everest, my understanding is that reaching base camp is an accomplishment unto itself. That’s kind of how I feel about arriving in the Canary Islands after sailing 1,250 nautical miles through the Western Med and along the coast of North West Africa. It marks the end of the beginning.

In Gibraltar, we explored for a few days in La Linea, Spain, just North of the Gibraltar-Spain border, until the weather improved. We met some interesting world-cruising sailors, enjoyed great meals in La Linea, walked across the border and Gibraltar’s airport runway into downtown Gibraltar and  climbed the rock. 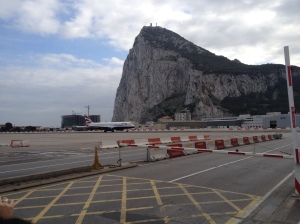 Crossing the Gibraltar airport into town.

Monkeys on top of the Rock of Gibraltar. 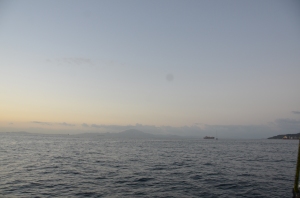 Passing through the narrow Strait of Gibraltar, Morocco on the left and Spain on the right. 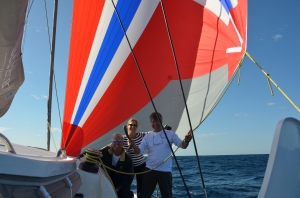 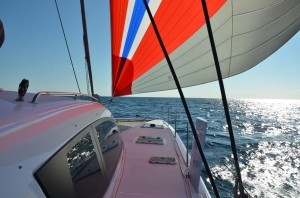 One of two small Tuna caught almost at the same time. 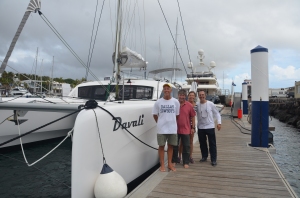 After docking in Lanzarote

Tomorrow, with great excitement and anticipation, we begin our 2,775 nautical mile crossing to St. Martin. This is the best time of year to enjoy the prevailing trade winds blowing from east to west. You can follow our progress on the top right link at http://www.saildavali.com. Next post from St. Martin!!!

The western Mediterranean has strong prevailing westerly winds which means headwinds and pounding seas when heading west into them. Last year, a captain told me they were “stuck” in a Spanish harbor for 11 days waiting for favorable winds and weather. We were pleased to arrive in Gibraltar quickly (5 days). We motor-sailed quite a bit to achieve our objective.

Sailing in the Med was fascinating. The rich history of discovery, war, sea battles; I could feel it. Knowing Africa was so close, looking at the chartplotter and seeing the Spanish coastline, Algeria and Morocco to the South, Gibraltar to the West, was dreamlike. I’m accustomed to seeing the charts of the Long Island Sound, Block Island, Shelter Island, Martha’s Vineyard.  Surprisingly, the Spanish coast reminded me of the arid foot-hills of Nevada.

We arrived in Gibraltar in the rain and 27 knots of wind in the early morning. I was in awe of this historic gateway to the East (Med) and the West (the Atlantic Ocean and the New World). The rock, the lighthouse, the religious structures, the commercial tankers and the beautiful blue-water sailboats were mesmerizing. The powerful strategic value of controlling this eight mile wide gateway is plain to see, especially to the British.

Our plan is to prepare Davali for a Friday departure to the Canary Islands. Until then, we’ll explore Gibraltar and neighboring Spain. 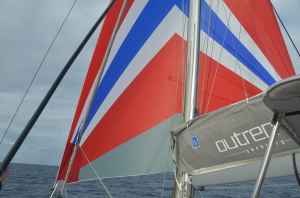 Awesome twin water spouts behind us, after refueling in Cartagena, Spain

Entering the harbor of Gibraltar

With Captain Jan, framed by the rock of Gibraltar, docked in the Spanish marina adjacent to Gibraltar (catamaran friendly)

We had a great time in La Grande Motte thanks to the Outremer Family. We felt nothing but warmth and support to make Davali the best she can be. Xavier, Francois, Jean-Pierre, Matthieu, Christophe, Ronan, Stephan and the Outremer team made it really fun and a great team effort. Xavier assembled great designers, builders and management to build a great product that sails beautifully.

Thanks to Matthieu for a nice video send off:

We practiced reefing before heading out to sea. Good thing…the wind hit 35 knots steady and the seas 12 feet. 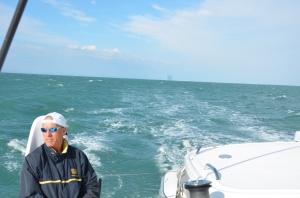 what 35 knots steady does to the sea over time. (about 12 feet high)

We hit the ground running. 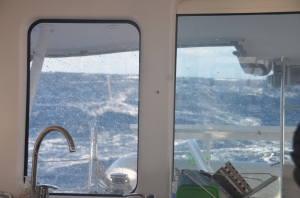 View from inside the bridge deck (between the hulls) 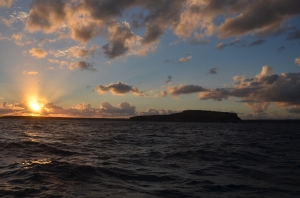 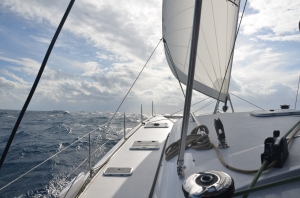 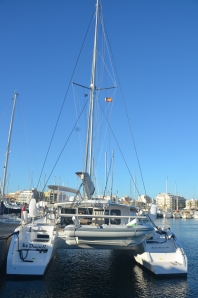 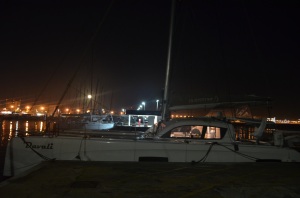 Davali at dock in Mallorca with full moon rising

That’s what I’m talking about.

It’s thrilling to capture a life long dream first triggered by reading Dove (16 year old sails around the world) as a kid.

I’m so grateful for the support of my family, friends and teammates at work. We have a very capable boat and outstanding crew (Captain Jan Cluistra, Claudia Dengler and Larry Roland), supported by an awesome Outremer team in La Grande Motte, France. 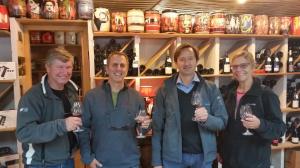 The Davali crew celebrated the completion of Davali with the dedicated Outremer team. Here’s a link to video Thanking the Outremer Team.

Viviane, Francois, and Xavier at the party. The Outremer welcome and ongoing warm hospitality was greatly appreciated by the Davali crew.

Time to make it happen!

Jan helps me get ready to climb with Spinlock Mast Pro

I decided to take a pic from up there next time

With Captain Jan in Sete, Claudia took from the opening bridge

Looks like we’ll start Wednesday, after completing punch list items and provisioning, and favorable wind/weather. Xavier, Jean-Pierre, Matthieu, and Ronan and the Outremer team have been very accommodating, hospitable and promptly addressing any punch list items. The Outremer Team is passionate about building beautifully designed catamarans, that are very fast and safe.

Hats off to Xavier Desmarest for creating such  an outstanding organization!

Davali crew shirts! Maybe a small step for clothing fashion, but an ocean leap for the Davali crew. 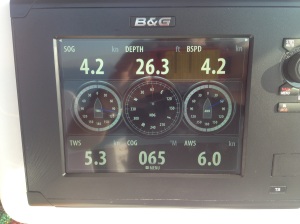 Check this out! True wind speed of 5.3 knots is typically cause for motoring. But Davali efficiently sails at 4.2 knots. Rocket, pas de motor! 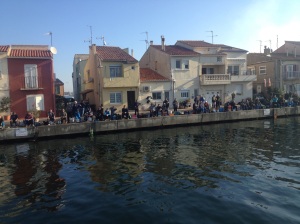 Thursday morning, waiting for a bridge to open in Sete, France, many fishing.

Entering the harbor in Sete at dusk.

Jean-Pierre and Jan test the water-maker.

Davali keeps growing on us. The design is beautiful, the boat is fast and comfortable. Jean-Pierre (on left) is an expert sailor who is training us well.

The view of Shelter Island from the flight. Davali’s home port. 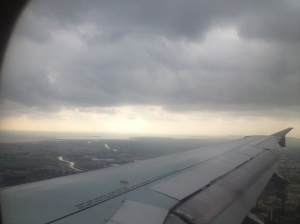 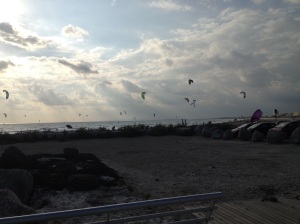 Showtime!!! The first day was exciting. Caught a couple hours of sleep on the flights, and adrenaline fueled the full day. Lunched with Captain Jan and Claudia, crewmate, and Xavier and team from Outremer. Davali looks gorgeous! We are worked on some punch list items. Slept great. Today, sailing to Sete for and overnight sea trial. 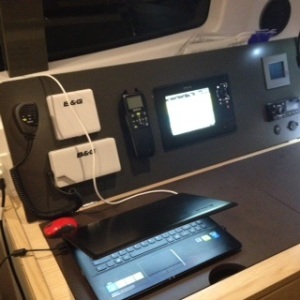